Recently I was lucky enough to be invited to attend the Linux Foundation Open Source Leadership Summit. The event was stacked with many of the people I consider mentors, friends, and definitely leaders in the various Open Source and Free Software communities that I participate in.

I was able to observe the CNCF Technical Oversight Committee meeting while there, and was impressed at the way they worked toward consensus where possible. It reminded me of the OpenStack Technical Committee in its make up of well spoken technical individuals who care about their users and stand up for the technical excellence of their foundations’ activities.

But it struck me (and several other attendees) that this consensus building has limitations. Adam Jacob noted that Linus Torvalds had given an interview on stage earlier in the day where he noted that most of his role was to listen closely for a time to differing opinions, but then stop them when it was clear there was no consensus, and select one that he felt was technically excellent, and move on. Linus, being the founder of Linux and the benevolent dictator of the project for its lifetime thus far, has earned this moral authority.

However, unlike Linux, many of the modern foundation-fostered projects lack an executive branch. The structure we see for governance is centered around ensuring corporations that want to sponsor and rely on development have influence. Foundation members pay dues to get various levels of board seats or corporate access to events and data. And this is a good thing, as it keeps people like me paid to work in these communities.

However, I believe as technical contributors, we sometimes give this too much sway in the actual governance of the community and the projects. These foundation boards know that day to day decision making should be left to those working in the project, and as such allow committees like the CNCF TOC or the OpenStack TC full agency over the technical aspects of the member projects.

I believe these committees operate as a legislative branch. They evaluate conditions and regulate the projects accordingly, allocating budgets for infrastructure and passing edicts to avoid chaos. Since they’re not as large as political legislative bodies like the US House of Representatives & Senate, they can usually operate on a consensus basis, and not drive everything to a contentious vote. By and large, these are as nimble as a legislative body can be.

However, I believe we need an executive to be effective. At some point, we need a single person to listen to the facts, entertain theories, and then decide, and execute a plan. Some projects have natural single leaders like this. Most, however, do not.

I believe we as engineers aren’t generally good at being like Linus. If you’ve spent any time in the corporate world you’ve had an executive disagree with you and run you right over. When we get the chance to distribute power evenly, we do it.

But I think that’s a mistake. I think we should strive to have executives. Not just organizers like the OpenStack PTL, but more like the Debian Project Leader. Empowered people with the responsibility to serve as a visionary and keep the project’s decision making relevant and of high quality. This would also give the board somebody to interact with directly so that they do not have to try and convince the whole community to move in a particular direction to wield influence. In this way, I believe we’d end up with a system of checks and balances similar to the US Constitution 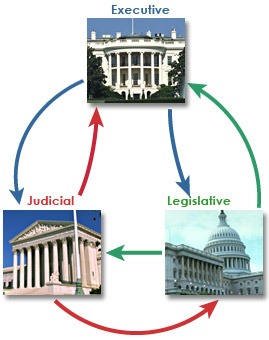 So here is my suggestion for how a project executive structure could work, assuming there is already a strong technical committee and a well defined voting electorate that I call the “active technical contributors”.

This system only works if the project contributors expect their project president to actively drive the vision of the project. Basically, the culture has to turn to this executive for final decision making before it comes to a veto. The veto is for times when the community makes poor decisions. And this doesn’t replace leaders of individual teams. Think of these like the governors of states in the US. They’re running their sub-project inside the parameters set down by the technical committee and the president.

And in the case of foundations or communities with boards, I believe ultimately a board would serve as the judicial branch, checking the legality of changes made against the by-laws of the group. If there’s no board of sorts, a judiciary could be appointed and confirmed, similar to the US supreme court or the Debian CTTE. This would also just be necessary to ensure that the technical arm of a project doesn’t get the foundation into legal trouble of any kind, which is already what foundation boards tend to do.

I’d love to hear your thoughts on this on Twitter, please tweet me @SpamapS with the hashtag #OpenSourcePresident to get the discussion going.